To begin came the attack of parliamentarian ships – the Vice Admiral, Warwick, and Paramour—just off the coast of Devon. Cannons fantastically loud! Then French ships sailed out to meet us and the Parliamentarians quickly fled, so we unfurled the purple banners— Long live the King —but rough winds blew us westward into storms.

In one small cabin six beds hung like cradles from a beam, and beneath my own a barrel of beans was home to a mischief of rats. My cabinmates were sick, vomiting into chamber pots they took on deck to dump. I sat and watched the sea exhaust itself out a circular glass, swells as high as any hill in Essex. If light allowed, I read. Twelfth Night in a gale. Would Viola’s fate be mine, washed ashore in a strange new world and dressed up like a man? I tucked up my feet and waited, swinging in the bed.

But no wreck came. Nor were we mistaken for pirates by fishermen out at dawn. We rowed ashore, at last, on the rocky coast of Brittany, struggled up a cliff. Next, by land, passing monks and bullocks and avenues of walnuts. We stopped in Bourbon to catch our breath, walk our spaniels. An ancient château sat over a monastery and a warm medicinal spring, where the queen soaked, finches whistling, as French physicians pierced her abscessed breast. Finally, in November, queen and court reached Paris, where the Regent of France, on behalf of the six-year-old king, had granted us use of the Louvre. I read, sticking to Spenser and Donne. “She is unsociable,” the others said, “and cannot grasp French.” I paced the cloister, the bells of Notre Dame clanging in the distance. I read. I wrote letters to my mother and sisters. And idly one afternoon, I wrote something else:

“I had rather be a meteor, singly, alone.”

Plus Paris itself was noisome. Even with its glittering bridges and orangeries, even if the birthplace of ballet.

“I had rather been a meteor, than a star in a crowd.” There was the humidity, the innumerable crashing coaches, and French aristocrats and servants relieving themselves in the halls. All summer, heaps of shit steamed on the palace steps. I swear I nearly died of the purging flux that August, saved by a powder of opium, pearls, and gold taken in a bread-pill each night before I slept.

O the fever. The dreams!

Yet most of all, I was bored— so bored. Having arrived at the height of history, the very middle of the world, I was shocked to find myself with less to do than when alone in the country back home. Though marbled and with warbling fountains, the Louvre was vast and always cold. As ladies-in-waiting schemed down endless mirrored corridors, the once-luminous queen retreated, weeping, desperate for the baby she’d been forced to leave in England—safe from the perils of our escape. Some days it seemed as if my fever had never broken: the incessant pointless duels, those ghostly caryatids, a monkey in a doublet roaming halls. Too, I’d grown aware of some new flimsiness in my body—stretching out my long thin arms, the skin as light as muslin, as likely to rip or tear. Even weeks after my illness, my face was white as clay. I refused to run, refused to break a sweat. While ladies-in-waiting pranced and spun, gave chase to honking swans, I only sat and watched them from the knotted flower beds, ignored the book in my lap, and recalled the grounds at St. John’s Green: the fields of purpling wild lettuce, the spidery fern-ringed pond.

Then one downcast afternoon, as I approached my shaded bench, I saw a woman, tall even seated, broad-shouldered and tanned, yet elegantly gowned in gray and pearl ropes. It was a peculiarly informal meeting: I simply sat. My stiff skirts brushed that lady’s, and I opened my book in silence. Yet despite this odd behavior, she took pity on a hushed and sighing girl. “My Mary,” she said, pointing to a child amid the topiary shapes, “who was ten this past July.”

Thus, in a tonsured garden, near a wall of autumn roses, it happened that I made a friend—my first. Lady Browne was newly arrived from London, wife of Sir Richard, French ambassador for our king. Soon I was a regular at their home. 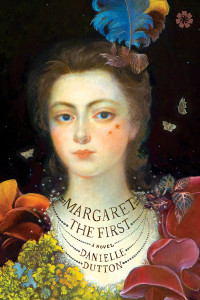