Notice shouldn’t scare me. The novel is, in subject, like the stories of my second life—like Law and Order: SVU and the canon of Catherine Breillat; like Lolita, Story of O, Freud, and Kathy Acker; like the Davids: Lynch and Cronenberg. Of sex and violent death. “Seedy underbellies.” Orgasms, sadomasochism, drug abuse, rape—these are topics I’m prepared for; what I’m not is Notice’s form.

Notice is Heather Lewis’ second novel (~1996). It was published third, in 2004, two years after Lewis took her own life. The novel reads like a prompted confession: it’s first-person, past-tense, chronological. The narrator is a young woman in a nondescript American town or city. She remains unnamed throughout. She tells someone once her name is Nina, though she tells us that’s just “the one I use in these situations.”  The situation is she has sex for money.

Having sex for money wasn’t, she explains, something she was “looking to do”:

…for me it happened by accident. And while it’s true I needed the money that’s not all I needed from it. I don’t care what anybody says. I understand the reason for telling people that, people outside it. But the thing is, I could never really see anyone as outside it. What the extra need is, the thing besides money? I’ve never pinned it down. I know it’s there, though.

“What the extra need is”—one of many questions Notice will ask and not answer. The narration is an inconclusive report; we’re told who, what, when, and where, but not the why or how. Notice is marked by its lacks. Stylistically, there’s no embellishment, no metaphors or poetic details. Its characters are like chalk outlines: they have hands, hair, chests, and an “inside me,” but no color, shape, size, or feel. This simple vocabulary feels impotent in everything but the sex, where it gets hard and hot:

I felt his dick through his pants before he took it out and then I felt it between my legs, rubbing me. He let go of my hands. I tried to find something to hold on the hood of his car, but couldn’t.

. . . I knew he was bringing me close and I didn’t think I could stop it. Worse, I knew he could tell. Not that he said anything. He didn’t have to. What he did was put his dick in my cunt and not my ass. And this not being his style made it clear to me he really wanted to be sure.

The sex doesn’t last long enough though, and in the scenes in between, the plain words, simultaneously direct (he did, she said) and imprecise (something, maybe, and I guess are common refrains), leave you feeling alienated, like after a good but one-for-good-reason one-night stand.

The book’s simplicity could be mistaken for artlessness, but its restraint is performative: it incites you to feel about the book how its protagonist feels about herself, incapable of holding onto meaning.

How do you write about nothingness? About the blank of depression?

I’ve known this state—the one wherein (I’ve said) “nothing matters” (though it’s more like matter figures but there’s no meaning in things: no connotations in objects or correlations between actions, just me in my meat body, significance-void; this, of course, in this state, is too much for me to articulate). To say “nothing” is to say something—that’s the problem. That’s why representations of depression in art so often fail.

I can list a few that don’t fail. Three media that evoke the worst feeling I know:

Notice also doesn’t fail. It does this, like the media listed, by communicating nothing the only way one can: by showing something else. Wallace used as many words from his highlighted dictionary as he could only to come back to “It”. Von Trier called upon a rogue planet apocalypse and a ripe woman to reveal utter indifference inside a body. Segal erected sketchy shells of lifesize selves. Heather Lewis, too, crafts around lack to shape a conspicuous void. In Notice, she writes a subjectivity that only notes the objective, traps us with a narrator who won’t look inside herself.

Consumers of art have expectations, if not for moral or message, then beauty, at least. Lewis employs literary devices, like the one-word-title’s demand, that give the reader literary expectations, but Notice offers no easy deliverance. Imagine the psychosexual terror of Breillat and Lynch without the bourgeois luxury or saturated palette; Lolita without the “light of my life” language. Notice strips everything bare—characters, plot, language. Its nakedness is unbearable, and so you find yourself dressing it up in your own projections.

Reading Notice through my friend Sarah’s eyes, I saw an argument for misandry. Reading it after seeing Nymphomaniac, I sensed the root trigger of addiction. Reading it in the context of current news media, the book became, last week, about the trauma of child sexual abuse.

Reading alone, it was the blankness of my notice that above all appealed to and appalled me. 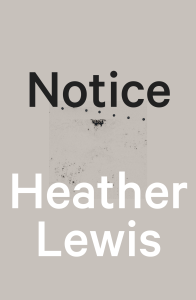