Ferocity Unleashed: The Art of Losing

When Olga, the protagonist of Elena Ferrante’s The Days of Abandonment, is first confronted with her husband Mario’s announcement that he’s leaving, she reacts to his “merciless rationality” with composure. We assume, as she assumes, that she loved him. The initial shock of reading about the days of Olga’s abandonment is a feeling that settles, over the course of the book, into a kind of pleasure. There’s a kind of violent enrichment that grows out of letting yourself go to a vulnerable place and being grateful that you endured the time you spent there.

In the ensuing weeks, Olga, who is 38 and the mother of two small children, comes undone. She endures the ragged, full-tilt emotions of someone whose husband has calmly dispensed with her for another woman. The harshest part of being left is that you she must face your her grief and rage alone. Naturally, Olga’s friends avoid her because no one wants to be around an unhappy woman. She is terrified that she will forget or be unable to take care of her children and fantasizes about sexual acts between Mario and his lover. She obsessively recalls a figure that haunted her childhood: the neighborhood poverella (“that poor woman”) whose noisy, desperate sobbing frightened and mystified her as a girl. Now, Olga’s girlhood fear has been revisited upon her.

As a young girl, Olga found the poverella’s “gaudy” grief repulsive. Her mother and her mother’s Neapolitan friends reacted to the poverella’s anguish with a similar lack of sympathy:

My mother talked about it with her workers, they cut, sewed, and talked, talked, sewed, and cut, while I played under the table with the pins and the chalk, repeating to myself what I heard, words between sorrow and warning, when you don’t know how to keep a man you lose everything, female stories of the end of love, what happens when, overflowing with love, you are no longer loved, are left with nothing.

Sewing themselves back together is the art and work of women. Ferrante is telling us that women must cut away this illusion. We can choose not to let love be the only thing that fills us up. If we as women learn anything from Ferrante, it is: Do not assume life won’t happen to you too. And how will you react?

First you must get angry. In a tour-de-force sendoff, Olga unleashes her fury on Mario:

What a glorious counterpoint to her husband’s indifference. Beautiful ferocity! I appreciated the tender, vulnerable brutality of it, the raw exposure of the body and mind at its most degraded. Ferrante wants us to respect Olga’s wild-eyed insanity, her suffering, to understand how her craving for revenge buoys the humiliation of being left. The courtesies that Olga and Mario exchanged in their marriage, the refusal to face the fact that love sags over time or was perhaps never strong enough – all is exposed in a violent repudiation of married life.

Olga writes Mario letters he glances at with revulsion. Olga’s rage grows, overflows, targeting not just Mario but everything and everyone: “Ugly bitch. She was the one who needed a leash,” she says of a woman who complains that her dog Otto is upsetting her infant. Then, in an abrupt change of heart, she viciously attacks Otto (“the big bad wolf of the fairy tales”) with a stick. Shortly after, she sees Mario and his lover on the street and attacks them too.

The end of Olga’s composure is the beginning of her transformation, which happens on a fever dream of a day. Close on the heels of her first failed sexual experience, everything spins dangerously out of control. Her son Gianni is vomiting, Otto is dying, ants are invading the house, the phone doesn’t work, and she cannot pull herself together to do something about any of it. This day-long hell, Saturday, August 4th, continues for 63 pages, a third of the book.

What becomes most compelling, as Olga documents the slow-motion disaster of her interior life, is the degree to which she lets it all hang out. She frankly exposes ugly feelings, instantly familiarizing truths that previously seemed unacknowledged, unknowable.

Maybe the milk really was burning on the stove, maybe the coffeepot had exploded, maybe gas was spreading through the house. But why should I hurry? I discovered with remorse that, if the child needed me, I felt no need of her.

Olga’s bitter admission that her own pain trumped her concern for her children stopped me in my tracks. So much for the unconditional love of a parent. I was on the subway at the time, and calmly closed the book around my finger while I exhaled. I looked around at all the tired people, each of whom, I knew, endured a set of miseries. I opened the book: Olga was trusting me. I wanted to let her suffering in.

What hurt me most as a parent was the recognition that your greatest fears may come to pass, that your distraction may overwhelm you, that it is possible for you to stop loving your children, if only for a moment. Before that Saturday, Olga needs her children. But in Olga’s most wretched moments, she stopped needing them altogether.

Olga notices through her haze that her desk is a mess. Her mental life is in shambles: She sees her own scribbles on Simone de Beauvoir’s The Woman Destroyed and Tolstoy’s Anna Karenina but can’t remember transcribing those passages. In one tiny detail, Ferrante offers a sweeping commentary. Hitting bottom is central to all three books, each of which pivots around an affair. (It is only Anna Karenina in which the woman cheats and by doing so she destroys herself.) Both de Beauvoir’s Monique and Ferrante’s Olga are broken by their husband’s deception. They don’t wash, they lose sense of time, and they’re both are stuck in the marriage house:

How far one can let oneself go, when one is entirely alone and shut in! The bedroom stinks of stale tobacco and spirits; there is ash everywhere; I am filthy; the sheets are filthy; the sky is filthy behind the filthy windows: this filth is a shell that protects me; I shall never leave it again.

It’s useful to take the long view of the three books. Over the centuries, we’ve made some progress. Anna kills herself (Anna Karenina was published in 1873-1877), Monique of 1967’s Woman Destroyed pops a lot of sleeping pills and considers suicide but mainly wishes she could abbreviate the time she has left before she dies of natural causes—she’s on the precipice. In Days of Abandonment (2002), Olga considers gulping down a handful of sleeping pills with cognac only once. She had just said, after all, in a rebuttal to de Beauvoir, “No woman is a knickknack. La femme rompue, ah, rompue, the destroyed woman, destroyed, shit. Unlike her predecessors, Ferrante’s Olga is up for the hard fight:

When you fight yourself, you get cut up because your flaws know you better than you know yourself. (You are also then responsible for stitching yourself back up.) It pained me to hear Monique wonder if her grief was manipulative, designed to get her husband Maurice back. And it hurt to watch Olga come apart as I rooted for her over those 63 pages. What insanity it is, I thought, flipping back and forth between de Beauvoir and Ferrante, that women blame themselves for their husband’s departure for a younger woman. Reeling from self-hate, Monique calls herself a leech, an egoist, a phony, rotten to the bone, when clearly she just loved Maurice deeply.

I don’t get the impression that Olga loved Mario much. It’s something I kept wondering about. Coursing between the lines of Days of Abandonment is the big fat question: What is love? Ferrante wants us to consider it.

Everything was so random. As a girl, I had fallen in love with Mario, but I could have fallen in love with anyone: a body to which we end up attributing who knows what meanings. A long passage of life together, and you think he’s the only man you can be happy with, you credit him with countless critical virtues, and instead he’s just a reed that emits sounds of falsehood, you don’t know who he really is, he doesn’t know himself. We are occasions. We consummate life and lose it because in some long-ago time someone, in the desire to unload his cock inside us, was nice, chose us among women. We take for some sort of kindness addressed to us alone the banal desire for sex. We love his desire to fuck, we are so dazzled by it we think it’s the desire to fuck only us, us alone. Oh yes, he who is so special and who had recognized us as special. We give it a name, that desire of the cock, we personalize it, we call it my love. To hell with all that, that dazzlement, that unfounded titillation.

Ferrante shows us how starkly different love often is from what we want it to be, and how the longing to be loved by somebody interferes with your sense of what love is. Painfully, it’s often not until you’re in dire straits that you are capable of looking at the issue clearly.

And so Olga emerges after her life-changingly dark summer day in August, realizing she is not like the Neapolitan women of her childhood. No woman, Ferrante makes clear, has to be.

That night, when Mario left, I read again the pages in which Anna Karenina goes toward her death, leafed through the ones about women destroyed. I read and felt that I was safe, I was no longer like those women, they no longer seemed a whirlpool sucking me in. I realized that I had even buried somewhere the abandoned wife of my Neapolitan childhood, my heart no longer beat in her chest, the veins had broken. The poverella had become again an old photograph, the petrified past, without blood. 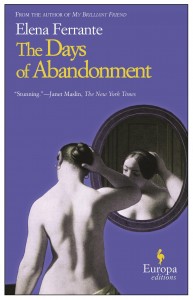 The Days of Abandonment
Elena Ferrante 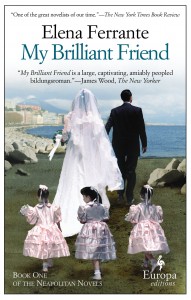