“Girls With Problems”: A Short Story by Suzanne Scanlon

You call it hanging out. She tells you this is a weird euphemism, but she is older than you and though that makes her decidedly more attractive, you won’t say dating or even seeing each other, as she does. You won’t call her your girlfriend, even after she calls you her boyfriend.

Her name is Marissa or Stacey or Christine and she decides to ignore the misrepresentation. She also ignores the way you drink too much, mostly because you are not a profound personality change drinker—unlike her last boyfriend, for example; you do not become injudicious or mean or abusive while drunk, not so far as she’s observed. It has to do with school, you explain—med school or law school or your never-ending PhD program in the Committee on Social Thought. She can’t understand the pressure; anyway, all of your classmates drink. Mostly, she doesn’t care. As far as she can tell, you become more loving, more affectionate. You stand by the door, buzz too many times, declare through the intercom that you must kiss her or that you must sing her a song or that you must read her the poem you wrote for her just that afternoon.

It is not a very good poem. She won’t tell you this.

She is usually in her pajamas or in her bed or on the floor or in the bathtub, which is in a small room down the hall from her apartment. She doesn’t wear actual pajamas, just loose sweats and T-shirts of the sort mental patients wear.

She’s twenty-five or twenty-eight or maybe even thirty by now.

She lives alone, with a cat named Sylvia or Clarice or Gertrude.

She is on stage—acting or singing or dancing or reciting poetry in a spoken word competition—when you first see her. She plays the role of the Patti Smith character in a Sam Shepard one-act about a lobster. You are there for your sister; you’ve come to this showcase, this selection of Winter One-Acts, to see your sister perform and so you see her.

“There is something about her,” you tell your sister, who also happens to be an actor or a singer or a dancer. It won’t be easy for you, having a sister and a girlfriend who act.

“Is she on drugs or is that just the part? She really seemed like she was on drugs.”

“She doesn’t drink. But yeah, slurs her words. Seems to be somewhere else.”

“I like it,” you say. “She seems interesting. And she’s not unattractive.”

Here’s the rising action. Don’t say you weren’t warned. Stacey or Marissa or Christine will go to the appointment alone. She won’t ask you to come along. You aren’t her boyfriend, after all. The photographer will be named Peter Wright, a name you’ll later note as vaguely ominous; he advertises in Backstage. That is all she will recall later, when you ask where she found him; she thinks maybe someone recommended him. Someone must have recommended him, she will say.

Peter Wright is short and overdressed. He lives in a doorman building midtown—a hectic part of town Marissa or Stacey or Christine rarely visits. His studio is on the 17th floor. She won’t guess until later that it is his home, too. Not until she sees the kitchenette. A bed pulled out of a wall.

The makeup artist asks to be paid in cash. She puts heavy makeup on Christine or Marissa or Stacey’s eyes, which are large and blue or brown or hazel. Next she plucks her eyebrows. Her eyes appear bulbous, rather freakish.

“I’m going to emphasize your eyes,” the makeup artist decides. And then, matter-of-factly, “Because the top half of your face is stronger than the bottom half.”

“You’re stronger on top,” she tells Marissa or Christine or Stacey once. But it will seem to be repeated over and over again, this line Stacey or Marissa or Christine won’t forget. Twenty years later she will have forgotten quite a lot of this, but not that pronouncement on her face:

It could be worse, she’ll think, in retrospect.

The photographer likes the tight long dress she bought at a flea market downtown for twenty dollars: a crunchy stretchy velvet dress in merlot. She wears it with platform pumps or boots or barefoot. She wears it to her brother’s wedding. You aren’t invited.

“You look so much like your mother,” her aunts and uncles gush, when they see her in that dress. It is sick, she tells you, the way they say it. Morbid, she tells you. You suggest that it is maybe nice, a compliment. Marissa or Christine or Stacey will look at you then, with that intensity you find irresistible, and tell you of her mother’s body.

You did not mean to be insensitive.

When they get to the end of the commercial and the theatrical shot, Peter Wright suggests that Marissa or Christine or Stacey wear something less formal, something more fun. She has a small cotton sundress with her, something she found at a vintage shop. It is sheer, with lace detail up top.

Peter Wright finds certain women irresistible, and as the shoot progresses he realizes that Marissa or Stacey or Christine might be one of these women. When he suggests that she not wear underwear, he is taking a chance, but he also feels pretty sure that she will oblige. She is willing. She is looking for something. Why shouldn’t he be it? It is experience she craves. Why else is she in New York, by herself, paying hundreds of dollars for glamorous photos of her face?

You will include these thoughts in your poem.

Thinking back on it, Marissa or Christine or Stacey wonders if it is pathological. Her lack of fear, even discomfort. Her willingness to go along. That it all excited her, at least a little bit. What do you think? She wears the dress with nothing underneath. Peter Wright isn’t handsome and she doesn’t particularly like him. She finds him kind of sad, but non-threatening. She sucks on a Charms blow pop from his candy dish. He grabs a second camera. She licks, sucks, makes funny faces.

Her photos had been so stiff, so formal; he hadn’t told her that. But now, something else. A hidden part of her.

“Yes, that’s it.” He is on his knees, coming in closer to her. “Let’s finish this roll,” he whispers.

Christine or Stacey or Marissa’s skirt is lifted now, her legs spread in the way she’s seen women do in magazines—a million of these images. How could something so cliché get her so excited? She isn’t sure. Soon Peter has his hands on her breasts. She lets him kiss her. She notices how unpleasant it is—not awful, just not pleasant. There is a difference and that difference is vast. The taste of his mouth, which is too much. More than she needs to know of his particular humanity. Traffic sounds below. His small window looks out to another brick building. Other people’s windows. He is still kissing her and touching her and soon she doesn’t feel a thing. She isn’t turned on for long, she notices, more curious than disappointed. He fumbles with his zipper and soon has his penis out, which is small in the way that people must mean when they speak of such things as small, climbs on her, moving her face to it. She puts her mouth on the very small penis, trying to make it larger, thinking how weird it is, and what a child he is, this man who must be thirty years older than her. He comes and she spits him out.

In the paper that morning she saw a photo of a woman who’d become paralyzed from food poisoning. The headline read: “The Burger that Changed Her Life.” Marissa or Stacey or Christine thought of the woman as she dressed. The woman was young, dressed up, looking to the camera with hope.

You call her later.

“I slept with the photographer.”

“Have you ever had sake?”

“I guess I didn’t actually sleep with him.”

“There are a couple gallery shows we could check out. Or a movie. I’ve got the Voice here.”

She can hear you flipping through.

“I’m not going anywhere tonight,” she tells you, rolling over in her loft bed.

You call again later, but Marissa or Stacey or Christine doesn’t pick up and so you leave a message on her machine.

It is called “Headshot,” you say. You will send her a copy of the poem. But you will read it, too, into the machine.

“I just want to tell you that I forgive you.”

There is a long pause which isn’t silence on the machine, and then,

You are crying or you have a cold or something has caught in your throat. The tape cuts off before you finish.

Here’s the climax. One night in bed after you almost but don’t actually have sex, you tell her that you’ve had other girlfriends like her, in the past.

“Girls with problems,” you say.

Marissa or Christine or Stacey has her back to you. She looks toward the broken Rosary hanging from her bedpost. She stole it from her mother’s jewelry box. It has shiny red beads that sparkle. It was made with a sense of aesthetics, unlike the blue and pink plastic ones the nuns passed out in school. She keeps her eyes on the Rosary, which is beautiful and awful, and listens to you talk about an old girlfriend, someone named Ruth or Esther or Rachel, who is either dead now or working very hard to be dead.

“She must have been real pretty,” Marissa or Stacey or Christine says when you’ve finished your narrative, rolling back over toward you.

When she says it you repeat, “Girls with problems”—and she won’t be able to tell if it is pride or disgust or both that lingers in your voice as you hold the final consonant just a moment too long. 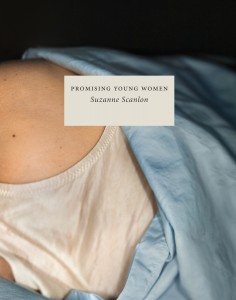