Not All Of Them Are Great

1.  My mother was an English major at Wellesley in the late 60s. On the bookshelf in our house, she kept all of her poetry books from the classes she took: John Donne, T.S. Eliot, W.B. Yeats and a few others.  When I was 13, I started reading them.  I really enjoyed The Wasteland, which she had annotated in colored pencil.  I didn’t understand it, but I liked the way it sounded.  Sometimes I consulted Eliot’s own footnotes and was intrigued by the information I learned.  I also remember thinking that writing poetry couldn’t be that hard and it was only a matter of time before I managed something of The Wasteland’s caliber.  Maybe this belief was a symptom of my generation’s alleged grandiosity, or maybe thinking tasks are easier than they really are is a personal fault.

2.  My mother did not own Ariel, but I managed nonetheless to develop a Sylvia Plath obsession when I was 15.  I am not ashamed of this, and don’t tell the story to disavow my fascination.  I still think that Sylvia Plath is a very good poet.  She is easy to imitate, but hard to imitate well.

3.  I wrote a lot of poetry between the ages of 16 and 21.  At some point, I started noticing that writing as well as T.S. Eliot, Yeats, Plath and some of my peers was actually quite difficult and I stopped trying.  Maybe my lack of persistence was a symptom of my generation’s alleged laziness, or maybe it was a wise decision.

4. When I was an undergraduate, I told a Russian friend of mine that the Russians and the French only admired the poetry of Edgar Allen Poe because they “lacked a sense of the English language.”  My friend was incredibly difficult to offend, a trait that disturbed me insofar as it seemed to reflect a deep fatalism alien to my American sensibility.  I succeeded in offending her with that comment.

5.  My Russian friend and I talked a lot about poetry.  She told me that she had memorized large portions of Eugene Onegin, and, among Russian women poets, preferred Marina Tsvetaeva to Anna Akhmatova.  I was semi-hoping to have a lesbian affair with her, but she didn’t seem game.  We considered taking “Poetess: the Grammar of the Self when the Poet is a Woman,” a class in the Russian department that promised to feature Plath and Tsvetaeva.  Unfortunately our shared major took up our time with computer science requirements.  I wonder if we had taken that class I could have successfully seduced her.

6. At this point, my friend is married to a man.  She has a son and a Ph.D. in computer science and I feel vaguely embarrassed lest she see this.  I also feel like I should have read Eugene Onegin by now.

7. Another friend and I both love Wallace Steven’s “Sunday Morning.”  The poem describes a woman who refuses to go to church.  Instead she sits around in her bedroom combing her hair and devising a post-Christian philosophy of life.  I remember sitting with my friend while he was trying to get up the nerve to call a clinic and schedule an HIV test.  During those minutes he told me that “Sunday Morning” is actually about the solipsism that threatens the secular individual. Referring to my copy of the poem, he quoted carefully to illustrate his point.  I was surprised to find he was right, in the same way I had been surprised years earlier to realize people my age were better writers than me. The test was negative.  Last year I had to get an HIV test for a visa requirement.  I freaked out in front of another friend gracelessly and entirely, and certainly did not interpret any poetry.

8.  In graduate school, I had a Pakistani friend who told me she loved poetry.  She said that she didn’t know too much English-language poetry.  But then she quoted to me some lines from John Donne that I remembered from my mother’s fat red paperback book, Four Metaphysical Poets.  Her accent made the Donne sound strange and wonderful to me.  We got together to share poetry from our respective traditions.  She told me: “Give me a theme, and I’ll see if I can remember an Urdu poem on it.”  “The impermanence of beauty,” I said.  Her face lit up.  “I do know a poem on that theme,” she said.

9. Even really good poets love the poetry of others.  This must be true, because some of the best poems are written about poetry and poets.   W.H. Auden’s “In Memory of W.B. Yeats,” for example.  Lawrence Durrell wrote a beautiful poem about Horace, a poem that is scornful but affectionate.  The same tone is taken by Ariana Reines in her poem “Permanent Water,” in which she describes reading Shakespeare’s sonnets.  “Not all of them are great,” she says, and then “The permanent decrepitude of authors/Dying on the breast of fugitive beauty is a subject/I shall not transubstantiate.  Basically it’s too/ Gay for me.”  It’s funny because she’s perfectly right: male homoeroticism is at the center of the tradition in a way that female desire is not.   But it takes a poet to put it really succinctly.

10. I don’t listen to a lot of music.  I watch television, but after growing up without a TV, that feels like an addiction or a curiosity.  I regularly suspect that my sentiments are out of line, and that worries me. The fact that I love poetry makes me feel more and less alienated.  More alienated, because a lot of Americans don’t.  Less alienated, because it’s a love I nevertheless share with people from all over the world, including some Americans.  Looking back on the moments I’ve described, I don’t see them as incidental to my life at all.  Rather they were times when I succeeded, more or less, against the odds, in communicating and feeling. 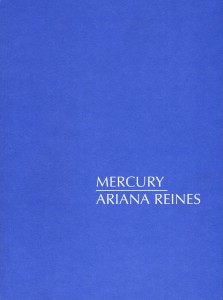 I loathe you
But I will let you pass

Through me. Your
Stupidity smeared all over me

Through which you can be made
To disappear