If only their sex life were less difficult. He referred to his organ as either “a vestigial, functionless appendage” or “the saddest member of the family.” As for hers, he paid it a lot of attention and talked about it as if it were his new favorite painting—how young and fresh; what extraordinary color and composition. “You have the most beautiful pussy I’ve ever seen in person,” he marveled. “And I’ve seen dozens. You can’t imagine the shapes they come in.” Since he’d taken care to qualify out someone’s refrigerator or vacuuming under a bed.

He made love to her primarily with his hands and mouth—like a woman would, he said—and also with his voice. She wasn’t read to as a child, which he considered an outrage, and so, after sex—or sometimes before—he read to her from Kipling’s The Jungle Books (his choice), which suited his voice perfectly, because if wolves could talk they would sound just like him, and then short stories by Hemingway, whom he called Uncle Hem, and Flannery O’Connor and Chekhov and some other people she’d never heard of.

On Sundays they climbed the fire escapes of the abandoned mills downtown—their version of hiking—and rolled around on the rooftops. If the weather was nice they smoked cigarettes and took black-and-white photographs of each other with her old Nikon. After one such expedition near the end of August, they were walking back to her apartment when Disgusting veered toward a large pile of garbage someone had left on the street.

“Mind if I sift through this stuff?” he asked.

She waited on a nearby stoop. She heard someone exit the building behind her and blindly scooted over to let the person pass.

It was Janine Stromboni, an old acquaintance from high school, one of the few girls Mona had liked, even though they’d had zero in common. Janine looked much the same: huge hair, liquid eyeliner, fake nails, tight jeans.

“Just moved in,” Janine said, and sat down. “You still smoke?”

Mona fished two out of her bag and lit them both before passing one to Janine. They chatted for a few minutes and then Mr. Disgusting waltzed up carrying a green vinyl ottoman.

“A footrest for my footsore princess,” he said and gallantly placed it at her feet.

She introduced Disgusting to Janine. To Mona’s relief, he looked good that day, like your average aging hipster. He had a tan, recently dyed black hair, and was sporting a Mexican cowboy mustache. His denim cutoffs were a little on the dirty side, but his shirt was clean, and Janine would never know the shoes he was wearing had been retrieved from a Dumpster.

Janine, however, looked plainly disgusted by Disgusting, and for a split second she saw him through Janine’s eyes: an old dude with dirty hair and no teeth, what Janine would refer to as a “total creature.”

Her feelings for him, however, didn’t change. If anything, she grew more attached. Like cancer, he had a way of trivializing the other aspects of her life. Things that had previously seemed important were now pointless and absurd, her college career in particular. So, when the time came to register for the fall semester, she blew it off. Her major, studio art with a concentration in photography, seemed like a joke now, especially in busted and depressing-as-hell Hole. If she was going to study art, she reasoned, didn’t it make more sense to go to a real art school in a city that inspired her?

“Fuck art school altogether,” Disgusting said. They were in bed, wearing only their underwear and listening to his collection of psychedelic records, which he’d brought over to her apartment on their fourth date and to which they’d been dancing ever since. Dancing, Disgusting maintained, was the key to salvation.

“I can see going to college for math or science,” he said. “But art? Waste of time. All you really need is persistence and good taste, which you already have. The other junk you can pick up from books.” He smiled and slipped his hand into the front of her underpants. She was wearing one of her days-of-the-week underwear, the green nylon ones with yellow lace trim, the word “Wednesday” stitched across the front in black cursive. It was Friday.

“You smell different today.” He removed his hand and thoughtfully sniffed his fingers. “You smell like . . . hope.”

“What do I usually smell like—despair?”

“Like a river,” he said. “A little-known river in Latvia.”

She pulled at the waistband of his boxers, but he stopped her. “Let’s leave my genitals out of this.”

“Too sad and disappointing.”

“But I like your sad and disappointing genitals,” she assured him. 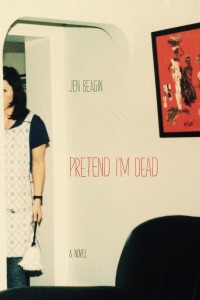