“I did a reading at Bluestockings in New York City about four years ago, and there was a big discussion afterward about how frustrated I was that younger lesbian writers are not having lesbian content in their work. I know why they’re not doing it: because you can’t have a career if you have it. But unless people keep submitting that material, it’s never going to change. What we see is really bad-quality work, because the most talented writers are escaping the content. The literature gets destroyed.”

– Sarah Schulman, interviewed by the Believer

I started off my creative career firmly outside of the closet. I felt like straight people had enough art by and for them, and since I was queer, then by god, my art would be too! I thought the distinction between “gay artist” and “artist who is gay” was irrelevant because I thought it was nonsense to rank aspects of myself. I named my band “The Dykings.” I wrote songs with queer narratives, queer references, she and her. At the time I was living in Chicago and buttressed by a strong gay community.

I remember I did not want to tell my mom the name of my band.

I decided to move to Portland in the summer of 2011 and left my friends and community behind. I did not know anyone in Portland. I drove across the country with the bare minimum amount of personal effects, and had the remainder delivered three weeks later once the moving company had obtained enough westward shipments.

The truck driver showed up at 10:45 on a Thursday night. He said he knew it was late, but he’d like to get one last load in. He said I would have to help him unload, which I was surprised and annoyed by. But I was eager to sleep in my own bed so I agreed.

Once he got inside he surveyed the extent of my belongings. I had three guitars, a laptop, a cat, and a pile of blankets. “Do you play guitar?” he asked. “Yes,” I said. “I play guitar.” “Are you any good?” I said that I was. “When we’re finished,” he said, “I’m going to play a song for you.”

It was midnight by the time we were finished unloading. I hoped that he would forget his earlier declaration but he did not.  I told him that I didn’t really think it was a good idea because my neighbors had asked me not to play guitar past ten o’clock. “I’m just going to play one song,” he said.

He played me a song, which I will charitably describe as “not my taste.” Then he handed me back my guitar and told me to play one.

I sighed and agreed. I tried to think of something that was complex, guitar-wise, so that I could prove to this asshole that I was a good guitar player, but also not too long, since I wanted him to leave.  I settled on a song called “The Function of Lilith and Eve.” It was a good representation of my work at the time, and was often the song I sent to people who were in charge of booking. I began singing. There’s a reference in the second verse to the Songs of Bilitis, which is a coded gay reference, but I wasn’t too worried about him picking up on it. Then, as I hit the bridge, I realized what I was about to sing, which was something that was blatantly gay. It was, in fact, the gayest thing I’d ever written. I realized I was about to sing the gayest thing I had ever written for a truck driver who had consistently made me feel unsafe and uncomfortable, alone in my house well after midnight, in a city where I knew literally no one. What would happen when he found out about my gayness? Should I stop singing? What if this gets ugly? Was he going to murder me?

He probably wasn’t going to murder me. The momentum of the song carried me along and I kept singing.

He did not murder me. “You have a beautiful voice,” he said. He decided he needed to play me another song. This one, I will tell you was horrible. It was an unfocused, interminable love song whose single unifying hook was a woman’s name. It might have been Pearl, to take advantage of the rhyme with girl. I felt like I was imprisoned in my own home by terrible music. When he finished, he wanted to play me another. “My neighbors really don’t like me playing after ten,” I said. “I’m so sorry.”

I remember volunteering for the Rock and Roll Camp for Girls and feeling like I couldn’t play a lunchtime show for the campers because of the name of my band and because of the content of my songs.

That fall I entered the poetry certificate program at the Independent Publishing Resource Center. I was looking forward to gaining poet peers, and to improving my own writing. The workshop process was more difficult than I expected. My poems didn’t ever seem to land. I remember writing a poem exploring the bondage of gender roles and feeling it was strong, and the disappointment when no one seemed to connect with it. “The baseball imagery is a little much for me,” someone said. “I don’t understand why this is a poem,” someone else said.

After class, one of the girls in my class offered to give me a ride home. She also happened to be queer. I told her about how upset I was. “I definitely got the feeling it was about the butch/femme dynamic,” she said. I didn’t understand why she didn’t say something about it during workshop.

I remember at some point I felt tired of writing about my life. I felt tired of people complaining that my work was narrative. I was tired of describing important things from my life and people not getting them at all.

My style evolved radically over the semester break. I began exploring non-narrative and non-linear narrative spaces. In one poem, called “Emergence,” I had a straight couple as characters. It was the first time I had written about a boy and a girl in at least five years. I felt weird about them being in there. At the same time, I relished the elegance of differing pronouns.

Our final project was a chapbook. I was proud of how my work had developed over the course of the year. I wrote about the relativity of reality, of the strangeness of intermediacy, and a recurring dialogue with a cranky saint. I did not write a single poem with gay content.

A year passed.  I struggled with my creative work. I participated in several more workshops and found a writing group. I was producing, but not very happy about what I was producing. I felt restrained. I felt alienated from the things I was creating. People liked them! People said things like, “I think this is terrific,” and “I really enjoy this,” and I would graciously nod but be inwardly disappointed. “I feel like there is a wall I am afraid to write around,” I said to people. I did not know what the wall was.  My therapist suggested that the wall had to do with being vulnerable. I said it was possible. My mentors accepted the existence of the wall, and suggested I needed to write through it. I said that was good advice.

I talked with several people about dropping the name “The Dykings” and performing as something else. “I think you have to decide whether you’re a gay artist or an artist who is gay,” someone said to me. I did not want to decide this.

It is a kinder, gentler closet. At work, one manager asked me to be on a diversity panel for new hires. Another manager used gay as a pejorative and my peers advised me not make a fuss about it.  When I came out to my grandmother, she said, “I figured as much,” and told me I shouldn’t have to hide who I am, but my aunts and uncles have long ceased to ask me if I’m dating anyone. I am consistently well-liked at work, and I have an active role in the holiday ruckus. But I play by certain rules so that I don’t make people uncomfortable.

I thought about how many times I’ve said to people in the last few years that “being gay hasn’t made much of a difference for me.” This is absurd. I have a lot of privilege as a cis, white, middle class, mostly feminine presenting lady, but being gay drastically altered the course of my life. I am not a stay-at-home mom with a nice Catholic husband and four children. My lived reality is pretty different than that. The only reason I say that I haven’t had many problems is because on some level, I want to assimilate into the mainstream. I want that access to power. I want that access to attention. I want a baby and I want a bungalow and I want to be “normal.” And you can almost get it back, if you play by the rules. The price of assimilation is silence.

After finishing Gentrification of the Mind, I picked up Schulman’s book Empathy. I felt like parts of myself were waking up. I had no idea how much I had wanted to read a formally interesting book with a lesbian protagonist. I’d forgotten I could even want that. For so long, I had assumed that I could have representation or quality in art, but not both.  I read two more of her books in the next week. I was in a state of perpetual astonishment. I felt less alone. I felt more alive.

I catalogued all the fear and alienation I had experienced in the last few years and contrasted with this feeling of awakening. That fear was not unbased, or imaginary, or outsized. The fear was not going to go away. But this other feeling — this clear and heady curiosity — was beginning to tug me in a new direction. I wanted to see what was on the other side of that wall. 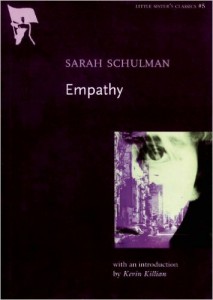 What I’ve Learned from Empathy

My girlfriend while I was writing this book (who I met on the subway), Debby Karpel, a singer, was the lovely office temp whose co-worker complained to her about a gay man sitting too close to him. “How would you like it if some butchy woman was in your face all night long?” Anna O.’s femininity was partially hers.