“All of the Money, None of the Vomit:” A Conversation about Making Scenes

E: What were the circumstances around the publication of Making Scenes?

P: Well, I started writing little snippets in the early 90s.  It was just when the Internet was coming into existence. My boyfriend was in this group of people in Hollywood that was looking for content for non-linear media.  They had all this technology and nothing to put on it.  People were talking about how they were going to, like, dissect James Joyce and put it in a new order and I was like, wow, that’s a really stupid idea, that’s gonna be really bad.  And so I brought my little snippets to the meeting and said, hey, this makes sense if you read it in any order.  And I became this darling of the new media world, because I could churn out content that they could throw onto their new technology.  But then it wasn’t really a world that was taken seriously at that time. Like, if you were a writer you wrote a book. I could tell people that I was writing on the Internet, and they didn’t even know what the Internet was.

P: I wanted to feel legitimate, and because I was so big, on the Internet, there were all kinds of university people who were interested. Brown University offered to publish it as a book, and the University of Colorado offered to publish it as a book. At the time I thought it was a huge victory, and I had the University of Colorado publish it. But then in Publishers Weekly, the review was like “she should just write on the Internet.” It was so upsetting to me. The whole thing just became really upsetting. I felt like “Oh, I should never write another book again. This was stupid.” Which was actually really sad.

E: They didn’t take your medium seriously, so they didn’t have any useful way to critique your work.

P: It is a non-linear story, and people didn’t really do that then.   At the time I think Robert Coover did it and Tom Fielding did it and, you know, you could count on your fingers the number of famous people who had written non-linear stories. So, it just looked incompetent to people who were used to writing being really linear.

E: Why did the title change from “Six Sex Scenes” to “Making Scenes”?

P: Because the publisher said you can’t have a book with “sex” in the title.

E: What a dumb publisher!

P: That’s so funny. I totally forgot about that.  At the time it was just very scary for anybody to be associated with this content. Like, if I’d go do a reading, people would ask me not to read certain things out loud. Now that I think about it, it was a lot more conservative 10 years ago.

E: Unfortunately a lot of conversations about narratives with women protagonists seem to center on whether those women characters are “likeable.”  Was that something you had to think about, vis a vis the narrator of “Making Scenes”? I actually think she is likeable.

P: This is a big concern for me because I’m a person who worries a lot about being found likeable.  And I have limited social skills to get people to like me but it doesn’t mean that I’m not trying, so … it was shocking, it was absolutely shocking to me to hear that the protagonist wasn’t likeable.  Because it’s mostly based on my life, and I just … I still don’t even really know why she’s not likeable. Why isn’t she likeable? Can you tell me?

E: I liked her because she’s funny. She has a vulnerability that is really endearing.  And her ways of thinking about things, even though they can be very twisted – she has this ruthlessness that strips everything down to its barest logical components. And that’s funny in a complicated way.   So that’s why I liked her. I think one of the reasons people might find her unlikeable is that she’s not trustworthy. She’s out of control, which is scary.  A person who’s out of control might do anything.

P: No one has ever said that to me. I didn’t know that about her.

E: It’s not someone you’d want to be your roommate, or whatever. But I don’t mind spending time with her for the duration of a book.

P: But I always think, like, she’s not dishing out bullshit. Like, you can have a roommate that’s really easy to get along with, but they’re doing all kinds of slimy things behind your back, eating all your Cheerios …  well, I guess she would do that too, though.

E: Oh, definitely.  And, like, ten more boxes.   She also sees everything with a dollar sign on it, because she has no other way of determining the value of anything, whether it’s an object or a relationship.  She’ll go to the lesbian club and think “Oh, my stock is higher here, in this world.” Or she’ll go to a party and think “I’m prettier than her, I’m prettier than her, I’m not as pretty as her.”  I think these are thoughts that a lot of people don’t want to admit to having.  It’s very rare to read about someone having those thoughts.

P: Not even a day. Probably half a day.  I just write all day. I’ve just written all day my whole life.

E: What’s the role of writing in your life? What purpose does it serve for you?

P: I don’t feel like something’s happened unless I write it down.  I get frantic sometimes if there’s good dialogue in my life, I have to write it down. A lot of people will be like “I’ll have dinner with you, but you can’t write during dinner.” I’ll get that a lot. Whatever, I just write after dinner. I have all these diaries. Sometimes I would fill a diary in a day.  Sometimes I would just write, like in the really bad times, that was my way of being alive.

E: The narrator of Making Scenes seems to be in danger of doing irreparable harm to herself.  It’s not obvious, in the book, what ultimately preserves her …

E: Well, it’s strange because everything that’s very disturbing and deeply horrifying and disgusting that she’s doing, all the binging and purging, the really blatantly destructive relationships, that’s stuff that goes on in the lives of women who are superficially incredibly high-functioning.  Incredibly driven, ambitious, high-achieving women – those two currents are running alongside each other in a lot of women’s lives. But that’s not an acknowledged truth.

P: This is something I want to get on the mountaintops and scream – that bulimic women are, as a demographic, very smart and accomplished. This is how they choose to deal with their problems. I’m not saying it’s effective or getting them anywhere, but just, it’s a demographic of women who are college-educated, have a good job, are high achievers – well, really, you have to ask, why is the woman in this book not more high-achieving?

E: Well, there are other things holding her back, though.  Anyway, it’s probably not, like, critically productive to diagnose her with stuff.

P: When I was writing it, I was thinking there are tons of women like this. I had no idea the world wasn’t talking about all the other women who were doing this.

E: It’s a lot to ask of people that they hold two seemingly contradictory ideas in their mind simultaneously.

P: I don’t have any distance from the narrator. Everything you say shocks me. I’m the absolute worst person to talk about this book.

E: We don’t have to keep talking about that stuff, if you don’t want to.

P: I feel really stupid. I just feel like I’m letting you down, like I have no personal insight and I’m sorry.

E: That’s not how it seems to me at all.  But you know, I’ll transcribe it, I’ll send it to you, maybe you’ll end up wanting to cut some parts out …

P: Oh no, I won’t cut anything out. That’s not in my nature.

P: Well now that I hear you analyzing it, I think that it’s really consistent. The blog is all about how to make money.  The blog is all about, ‘Life is a game, you win the game by having control over your life and making money. Here are the rules.’   During ‘Making Scenes,’ I was learning the rules for dating.  And I turned it all into money. And now I’m learning the rules for how to get through your career.  It’s ironic, I’m always writing about how money’s not going to make you happy, but I only know how to store information based on money. So then it makes total sense to me, that Making Scenes is about how to date rich men, and get their money, and Brazen Careerist is about how to get money for yourself, so you don’t have to date the rich men.

P: Exactly! ‘All of the money, none of the vomit!’

E: Do you think you will write another novel, ever?

P: Well the truth is – is this really bad to say?—this is my autobiography.  But people were like, ‘You just can’t market it as that, everyone will be horrified.” And actually there was stuff in there that was way worse, that I took out. Cause people were just, like, “No one can take this. No one can read this. Just stop.”  So, I feel like, in that regard, I’m doing that right now. If something happens to me, it doesn’t happen unless I put it up on my blog. And then because I have this career blog it’s got to have a money angle.  I feel like I am writing the next book, I just haven’t organized it.  I’m just chronically unable to organize the world except in terms of money. I must have another book there. I should do that.  If only the book industry made any money.

E: Well, there’s got to be another reason to do stuff, but far be it from me to expound on what it is.

E: The last time we talked you said that after you finished this book you had gotten really into yoga. Is that still part of your life? 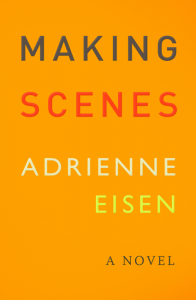 I HAVEN’T SEEN ROBERT for five days. He’s working on fixing things with his wife, but she’s not as smart as I am, and Robert needs smart. This is what he told me.

I didn’t expect to recognize myself in a short story collection that centers on an HIV-positive ex-heroin addict who moves to Minnesota to get her body clean and her life in order. I own a lot of skirts that hit below the knee and the only thing I’ve ever really been addicted to is other people’s approval. Emily Carter knows what it’s like, whatever “it” is.