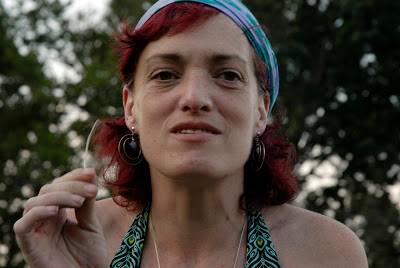 Emily Carter is the author of Glory Goes and Gets Some. Her work has received many awards and fellowships, including the Loft/McKnight Award, a Bush Grant, and a National Magazine Award. Her writing has appeared in Story Magazine, Gathering of the Tribes, Between C & D, Artforum, Open City,Great River Review, and POZ Magazine, for which she was the cover subject of the 1998 summer fiction issue. Glory Goes and Gets Some features stories that were originally published in The New Yorker, and the title story was selected by Garrison Keillor for The Best American Short Stories 1998. Emily Carter lives in Minneapolis.

Glory Goes and Gets Some
Emily Carter

Ask Amelio: An Excerpt from Glory Goes and Gets Some

On an early Sunday morning a reporter called to ask me questions about women with AIDS. Don’t waste your time with me, I told her, I’m nothing more in the scheme of things than a rather charming statistical anomaly. Meaning?

Getting Rid of Some

J was a curly-haired sophomore who drove what we called the party car: whenever he showed up he would unload an enormous duffel bag of hookahs and weed and terrible alcohol, for some reason usually electric blue bottles of Alizé. There were other drugs, too, but I didn’t partake so I couldn’t tell you what all he provided. It was never clear to me where it all came from, how my prep school classmates scored their ‘shrooms, E, coke and meth, or who met the actual drug dealers so that my friends could distribute in the parking lot before first period.

I got a nice email from Emily (Gould) the other day about my conversation with Emily Carter, published as part of a series I write for The Rumpus. She said she wished the piece had been longer, and I immediately regretted two choices I had made. The first was not pursuing further with Carter the subject of addiction to male approval and attention.

As the title suggests, Glory “gets” things. She gets more punishments than prizes, though, and together her list of experiential acquisitions is long: She gets expelled from all the good schools in New York City. She gets thrown out of CBGB (literally).

No Hierarchy of Pain

Emily Carter spends a lot of time, in Glory Goes and Gets Some, playing with ideas about who has the right to pain. I suspect that inside many of us there’s a voice that says me, I’m the one with the problems, pay attention to me, along with a conviction that we will lose out if we’re not the saddest person in the room.  Carter actually invites you to do this.