Hungry Ghost: An Excerpt from I’ll Tell You In Person

JUST BEFORE CHRISTMAS a couple of years ago, I made plans with a person whom I deeply admire. I won’t say who but I’ll say this: she’s somewhere on the spectrum between Eileen Myles and Beyoncé. You probably admire her too—or you might hate her and think she’s fat. Regardless, she is a Celebrity with a capital C.

I’d been infatuated with the Celebrity and her art for seven years. She was going to come and sleep over at my apartment on a Saturday night. The plans had been in the making for two months, so for two months, I’d been fantasizing about it and preparing for it—posing in the mirror for the photos we would naturally take together. Practicing my smile. The photos would obviously get millions and trillions of likes. My exes would choke on their own spit when they saw. She and I would giggle and eat snacks out of bowls and lie on my newly purchased fifty-dollar futon, spilling our respective guts, the way we both do in our art.

Even then I saw how ridiculous it all was. We’d never met before. She was too famous to take the Amtrak (I’ll take a car, the train can be a little dicey for me, she’d said). If she was in contact with me, think of the thousands of other people she was in contact with, whom she’d actually met in person. It was the holidays—wouldn’t she want to spend these days with her loved ones, her family and her boyfriend, not with me, a stranger? But she’d told me she was free in early December, so I rolled with it.

But how did she know I wasn’t a serial killer? A rapist? A sociopath? How did she know I wouldn’t have an apartment full of fans just waiting to ask her for favors and take selfies with her? We felt like we knew each other already because of our familiarity with each other’s work. This is how I make many of my friends—we’ve read each other’s work, feel like we know each other, and we get drinks. I was used to this pattern, only now the person on the other end happened to be her.

The Celebrity was to arrive at noon on Friday. All I’d had to eat since Wednesday were clementines because my stomach was such a mess. I had stress diarrhea. I had an anxiety ball in my chest. At night I dreamed only of her. I had nightmares we were out to dinner and my debit card was declined. I woke early with an energy similar to mania. I took walks and cleaned my apartment, wiping down counters and tables, sweeping floors, driving to T.J. Maxx and walking through the aisles like a zombie, unable to think clearly, buying candles and snacks and towels, considering buying new sheets but also knowing how irrational this was. I caught myself whistling while sweeping—I love whistling—and I remembered my brother noticing this once and telling me that the more people whistle in their lives, the poorer they will be. “Think about farmers,” he’d said.

I wanted to give my entire apartment a revamp but couldn’t afford to. This was the same apartment I normally boasted about. It is the nicest and most spacious apartment I’ve had in the entire decade of my twenties. I become enthusiastic when people ask me about it, going so far as to say, It is the apartment of my dreams. I say that moving into this apartment was the best thing that ever happened to me. There are two windows in every single room! There’s a closet big enough to write in with a built-in desk and an antique window, look!

But now I was second guessing, embarrassed about my regular apartment. One minute I was certain she’d be super charmed by the place, it’s old and quirky—amazing light, a clawfoot bathtub, maybe she’d want to film here! The next minute I was horrified by the slanting old floors and mismatched bookshelves. I was mortified that I still had a fucking futon. I always thought the first thing I’d do when I finally had money was buy a yellow couch.

We’d been e-mailing since autumn. She’d read Women and publicly supported it. She promoted it on social media and in interviews. On the Amtrak the morning after my book release party in New York City, I was listening to music and staring out the window when I got a notification that she was now following me on Twitter. I’d already been following her for years. She immediately sent me a message telling me she’d loved my book and what could she do to help? She gave me her personal e-mail address and said, E-mail me anytime. I began e-mailing her anytime. For every e-mail she wrote, I wrote two or three back.

I called my mom, who accused me of playing an April Fool’s Day joke on her, even though it was early October. This was, I thought, many female writers’ wet dream. She was like the Oprah of my generation, and I was living my best life. Arrogantly and embarrassingly, I assumed my career was now going to take off in ways I’d never even had the balls to wish for or let myself imagine.

At the beginning of our courtship, we e-mailed about once a week. We e-mailed about different vitamins and herbs we took to stay healthy: oregano oil, probiotics, fish oil. We said we should talk more about vitamins, ideally over smoothies. We e-mailed about books we were reading and wanted to write, about musicians and comedians and writers. She called me “angel” in her e-mails. We need to meet! we said. We are so connected! we said. We decided that instead of meeting in New York City, she would come to where I lived in Hudson. That way she could get out of the city and enjoy a minivacation, rejuvenate. Should she do a day trip or stay over? we wondered. I vote sleepover, she e-mailed. I sent her links of hotels and B&Bs but also said, Or you can stay at my place. I admitted I only had a pull-out futon but said it would be an adventure. I was embarrassed, knowing she was used to high-end hotels. I knew it would probably be fine, she didn’t expect me to be a millionaire, but I could not shake the voice of shame.

“Chloe thinks she’s e-mailing once a week with you-know-who,” my friend Elizabeth joked. “But she’s probably just getting catfished.”

I was cautious about telling everyone, but I told a healthy handful of people. I asked for advice. My mom told me to cut up fruit. If you cut it up and peel it, people will eat it, she texted, seeming as stressed as I was. My friend Fran told me if she were in Hudson, she would cook beef bourguignon. My friend Amanda asked if she could crash our dinner. My friend Ana said if we wanted to go to Hanukkah at her house, we could. Middle-aged women in my small town told me to bring her over for tea. My brother made a point, saying, “Have they ever invited you over for tea by yourself?”

Fran’s comment about the beef bourguignon bothered me. Not because she said it, but because I began to beat myself up for not being able to cook. It would be so cozy to convene in my kitchen with music and wine. How I wished more than anything I could cook beef bourguignon.

Thankfully, though, she and I planned on having cheeseburgers. She was public and shameless about also not knowing how to cook. I’d read interviews and heard podcasts where she spoke of it. She’d e-mailed me that cheeseburgers were her passion, trumped only by hot dogs. We would go out for burgers. I had two restaurants in mind.

I see now I wanted to be seen with her. Being seen, this was the seed of my life. A writer friend who is a practicing therapist as well once told me this is why writers write. They don’t feel seen. I think this must apply to the Celebrity and me both. When we walked to get burgers, would we be stopped on the street?

It’s true she and I were connected in many ways. We saw eye to eye on feminism, we crafted our life experiences into hyper-personal and sometimes provocative art. My first book—a collection of personal essays—was compared half a dozen times to her and/or her work in reviews. I am not into celebrity gossip and spent years not knowing names of the most famous actors and actresses. But this woman was different. Looking at her, a woman whose birthday was a month after mine (yep, I knew when her birthday was) was like looking into the mirror and seeing a more successful version of myself.

Just over the summer, an acquaintance from high school had asked me if I’d ever met her.

“No!” I said defensively. “How and why would I have met her?”

“You meet a lot of people, and you guys write similar stuff.” She shrugged.

I was flattered by this, but it also made me panic. I’d felt so strongly about her work for years. She was the one artist I would want to meet, if I could meet anyone. I did not dare fantasize about meeting her even in the secret recesses of my own brain, because the devastation I would feel when I didn’t would break my heart. It was too far-fetched. Which made this attention from her all the more surreal.

to read the rest, buy the book! 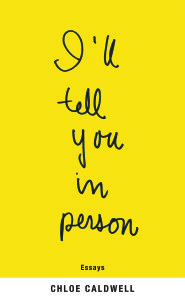