Reading to the Blind Girl: An Excerpt from Inside Madeleine 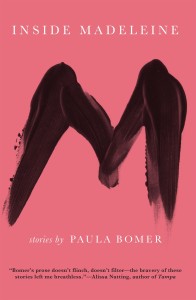 “You had to write a NOVEL to talk yourself out of having a third child?”: An Interview with Paula Bomer

Emily Gould: What surprised you, if anything, about reaction to Nine Months? Paula Bomer: Well, I wasn’t surprised to get that one-star review that was like “this is disgusting!” A friend of mine checked out all the other books that person read and they were all, like, bodice-rippers.  So that’s just not my audience, and I’m fine with that person thinking it’s disgusting. And I got a lot of “the narrator’s not sympathetic,” which I’m not surprised by, because it took me ten years to sell this book, and it was mostly because all these agents and editors didn’t find the character sympathetic enough.