Titus: An Excerpt from Lolly Willowes

It was the third week in August. The weather was sultry; day after day Laura heard the village people telling each other that there was thunder in the air. Every evening they stood in the village street, looking upwards, and the cattle stood waiting in the fields. But the storm delayed. It hid behind the hills, biding its time. Laura had spent the afternoon in a field, a field of unusual form, for it was triangular. On two sides it was enclosed by woodland, and because of this it was already darkening into a premature twilight, as though it were a room. She had been there for hours. Though it was sultry, she could not sit still. She walked up and down, turning savagely when she came to the edge of the field. Her limbs were tired, and she stumbled over the flints and matted couch-grass. Throughout the long afternoon a stock-dove had cooed in the wood. “Cool, cool, cool,” it said, delighting in its green bower. Now it had ceased, and there was no life in the woods. The sky was covered with a thick uniform haze. No ray of the declining sun broke through it, but the whole heavens were beginning to take on a dull, brassy pallor. The long afternoon was ebbing away, stealthily, impassively, as though it were dying under an anesthetic.

Laura had not listened to the stock-dove; she had not seen the haze thickening overhead. She walked up and down in despair and rebellion. She walked slowly, for she felt the weight of her chains. Once more they had been fastened upon her. She had worn them for many years, acquiescently, scarcely feeling their weight. Now she felt it. And, with their weight, she felt their familiarity, and the familiarity was worst of all: Titus had seen her starting out. He had cried: “Where are you off to, Aunt Lolly? Wait a minute, and I’ll come too.” She had feigned not to hear him and had walked on. She had not turned her head until she was out of the village, she expected at every moment to hear him come bounding up behind her. Had he done so, she thought she would have turned round and snarled at him. For she wanted, oh! how much she wanted, to be left alone for once. Even when she felt pretty sure that she had escaped she could not profit by her solitude, for Titus’s voice still jangled on her nerves. “Where are you off to, Aunt Lolly? Wait a minute, and I’ll come too.” She heard his very tones, and heard intensely her own silence that had answered him. Too flustered to notice where she was going, she had followed a chance track until she found herself in this field where she had never been before. Here the track ended, and here she stayed.

The woods rose up before her like barriers. On the third side of the field was a straggling hedge; along it sprawled a thick bank of burdocks, growing with malignant profusion. It was an unpleasant spot. Bitterly she said to herself: “Well, perhaps he’ll leave me alone here,” and was glad of its unpleasantness. Titus could have all the rest: the green meadows, the hill-tops, the beech-woods dark and resonant as the inside of a sea-shell. He could walk in the greenest meadow and have dominion over it like a bull. He could loll his great body over the hill-tops, or rout silence out of the woods. They were hers, they were all hers, but she would give them all up to him and keep only this dismal field, and these coarse weeds growing out of an uncleansed soil. Any terms to be rid of him. But even on these terms she could not be rid of him, for all the afternoon he had been present in her thoughts, and his voice rang in her ears as distinctly as ever: “Wait a minute, and I’ll come with you.” She had not waited; but, nevertheless, he had come. Actually, she knew—and the knowledge smote her—Titus, seeing her walk by unheeding, had picked up his book again and read on, reading slowly, and slowly drawing at his pipe, careless, intent, and satisfied. Perhaps he still sat by the open window. Perhaps he had wandered about, taking his book with him, and now was lying in the shade, still reading, or sleeping with his nose pressed into the grass, or with idle patience inveigling an ant to climb up a dry stalk. For this was Titus, Titus who had always been her friend.

She had believed that she loved him; even when she heard that he was coming to live at Great Mop she had half thought that it might be rather nice to have him there. “Dearest Lolly,” Sibyl had written from Italy, “I feel quite reconciled to this wild scheme of Tito’s, since you will be there to keep an eye on him. Men are so helpless. Tito is so impracticable. A regular artist,” etc. The helpless artist had arrived, and immediately upon his arrival walked out to buy beer and raspberries. Sibyl might feel perfectly reconciled. No cat could jump into the most comfortable armchair more unerringly than Titus. “Such a nice young gentleman,” said Mrs. Garland, smoothing his pyjamas with a voluptuous hand. “Such a nice young gentleman,” said Miss Carloe, rubbing her finger over the milling of the new florin she received for the raspberries. “Such a nice young gentleman,” said Mrs. Trumpet at the shop, and Mrs. Ward at the Lamb and Flag. All the white-aproned laps opened to dandle him. The infant Bacchus walked down the village street with his beer and his raspberries, bowing graciously to all Laura’s acquaintances. That evening he supped with her and talked about Fuseli. Fuseli—pronounced Foozley—was a neglected figure of the utmost importance. The pictures, of course, didn’t matter: Titus supposed there were some at the Tate. It was Fuseli the man, Fuseli the sign of his times, etc., that Titus was going to write about.

It had been the ambition of his life to write a book about Fuseli, and his first visit to Great Mop convinced him that this was the perfect place to write it in. The secret, Titus said, of writing a good book was to be cut off from access to the reading-room of the British Museum. Laura said a little pettishly that if that were all Titus might have stayed in Bloomsbury, and written his book on Good Fridays. Titus demurred. Suppose he ran out of ink? No! Great Mop was the place. “Tomorrow,” he added, “you must take me around and show me all your footpaths.” He left his pipe and tobacco pouch on the mantelpiece. They lay there like the orb and scepter of an usurping monarch. Laura dreamed that night that Fuseli had arrived at Mr. Saunter’s poultry-farm, killed the hens, and laid out the field as a golf-course. She heard a great deal about Fuseli during the next few days, while she was obediently showing Titus all her footpaths. It was hot, so they walked in the woods. The paths were narrow, there was seldom room for two to walk abreast, so Titus generally went in front, projecting his voice into the silence. She disliked these walks; she felt ashamed of his company; she thought the woods saw her with him and drew back scornfully to let them pass by together. 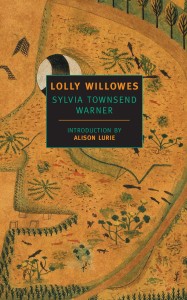