“My Love”: Read an Excerpt from Thérèse and Isabelle

I wandered away from the others over toward the lavatories. I went in. An odor halfway between the chemical smell of a candy factory and that of school disinfectant still hung inside the little cubicle. But my loathing for these exhalations from the general disinfecting process that always sapped our energies on the first evening back at school had left me. The odor was a backdrop awaiting our meeting. The shrieks of the younger girls receded behind me. A vapor rose from the pale, much-scrubbed wood of the seat: the vapor of tenderness given off by a mass of flaxen hair. I leaned over the bowl. The sleeping water gave me back a reflection of my face before the creation of the world. I fingered the handle, its chain, then took away my hand. The chain swung to and fro beside the melancholy water. Someone called to me. I didn’t dare put on the hook and shut myself in.

“Open it,” the voice begged.

Someone was rattling the doors.

I could see the eye. It was blocking the heart-shaped air-hole cut in the lavatory door.

Isabelle was there from the land of meteors, of avalanches, of wrecks, of plunder. She had thrown me a word of liberation, a program; she was bringing me the invigorating breath of the North Sea. I had the strength to remain silent, even as I swelled with pride.

She was waiting for me, but that did not guarantee security. The word she had used was too strong. We looked at one another, we were paralyzed.

I threw myself into her arms.

Her lips were trying to find Thérèses in my hair, in my neck, in the folds of my pinafore, between my fingers, along my shoulder. Why couldn’t I reproduce myself a thousand times and offer her a thousand Thérèses… I was nothing but myself, and that was not enough. I wasn’t a forest. A blade of grass in my hair, a piece of confetti in the folds of my pinafore, a ladybug between my fingers, a piece of fluff on my neck, a scar on my cheek would have given me more body. Why wasn’t I the weeping locks of a willow tree beneath her hand as it stroked my hair?

I contemplated her, I was remembering her in the present, savoring her nearness to me from final moment to final moment. Those in love are always standing on the platform of a railroad station.

I was asking questions and demanding silence in reply. We chanted our responses and laments together, revealing ourselves as actresses to the manner born. We hugged each other till we could no longer breathe. Our hands were trembling, our eyes were falling shut. We stopped, then began all over again. Our arms fell to our sides, and we marveled at our poverty. I molded her shoulder with my fingers, I wanted to find simple, rustic caresses for her, I longed to feel her shoulder as rough bark beneath my hand. She closed my fingers into a fist, she was polishing a pebble. I was blind with tenderness. Forehead against forehead, we told one another no. We hugged one another for one last time after the last time, we were joining two tree trunks together into one, we were the first and last lovers in the world, just as we are the first and last mortals when we discover death. The shrieks, the bellowing, the noisy conversations out in the yard were reaching us in sudden gusts.

“Harder, harder… Hug me till I can’t breathe,” she said.

I hugged her, but I couldn’t annihilate the shrieks, or the yard, or the boulevard and its plane trees.

She pulled herself free, backed away, came back, transformed me into a magnolia, bent me backwards, then said, “Like that, you do it like that…”

Her strength made me feel sad.

Isabelle was gazing at me with melancholy in her eyes.

I pulled her against the lavatory door and stumbled into the pedestal. She held on to the door to keep herself from falling and the hook fell at her feet. She was already making good my own incompetence.

She let her head fall onto one shoulder, cooing like a dove as it lay there.

I dug into her neck with my teeth, I breathed the darkness under the neck of her dress into my lungs: the roots of a tree gave a sudden shiver. I hugged her, suffocating the tree; I hugged her, stifling the voices; I hugged her, annihilating the light.

Now we were looking at the blue heart of the sky through the air-hole in the door. The eight o’clock morning sky was hatching out the earth.

Isabelle conveyed to me without words that we weren’t staring at one another intensely enough. Love is overwork. Our two gazes wandered from their paths, lost their way, then found each other again. I followed a shout from one of the girls outside in Isabelle’s eyes: “I wish I could eat you.”

I pushed her against the wall, I nailed her hands against it with the palms of mine. My eyelashes flickered between those of Isabelle.

My eyebrows were caressing Isabelle’s.

“It’s incredible how much I can see you,” she said.

We were talking. A pity. To say something is to murder it. Our words, which would never grow, never grow more beautiful, could only wither away inside our bones.

I plunged into her eyes.

But feelings whither away with words.

I put my hand over her mouth. Isabelle wanted to tell me what she felt.

I stifled back the confession she was trying to make. I took my hand away from her mouth: her arms had fallen to her sides.

She glanced sadly out at the sky through the hole in the door. I’d hurt her. We were being borne aloft by the storm of shouts outside.

“What you wanted me to say… you can tell it to me later.”

She took my hands away from her waist. The sky through the hole was changing: the cloudless sky with its anonymous blue was depressing us.

“This is so silly. We understood one another so well a moment ago.”

“And now we don’t,” Isabelle said.

It was her prim double with closed eyes speaking for her.

I took a step backwards and held Isabelle in gentle silhouette through a mist. She had withdrawn into a dream that was growing slowly colder. We were being pierced through and through by shrieks from outside.

“No, I’m not sulking,” Isabelle said.

“Are you leaving me?”

The ripe fullness of that quietly spoken no: the tight-squeezed beauty of a snowball made in May that I would forget again as soon as I began to die outside the gardens.

By cheating, I could see the tarry glint of the stagnant water.

Isabelle lifted her arm, pulled at the tortoise-shell pin holding her coiled-up hair, but did not take it out. I was charmed by her unfinished gesture. Isabelle still didn’t open her eyes. The arm fell to her side once more, defeated by the lethargy of the lavatories.

I hugged her with all the strength of my repentance, I breathed her in, I pulled her tight against my belly and made her into a loincloth for myself.

I staggered as I felt Isabelle become embedded into me.

She was melting my ankles and knees into delicious decay. I had burst with warmth like a fruit, I was running with the same liquid sweetness. There were pincers softly tearing at me, oh so softly. Her hairpin fell into the bowl and we lost our balance. I plunged my hand into the water, then replaced the pin in her hair.

Her fondling was turning me to ice. I was being separated from my hand; I could no longer recognize it. I took it back from her, dried her wet lips with my dry ones, and thrust my tongue into her mouth. Isabelle clasped her hands: she was making a rest for my chin.

I pulled away from her in order to see her better.

She had moved around to my back, circled me with one arm, pulled me to her, hollowed herself against me. I was ashamed at having my back to her, of showing her those sullen hanks of hair I could do nothing to make fine. The blood rose into my cheeks, into my throat, as I tore at her pinafore and crushed the hairs beneath. Her hand was making it difficult for me to breathe. I was sobbing without a sound, without tears. Isabelle was sobbing, too, as she pressed her hand against my pinafore: my clothes were crushed against me. A cry from the yard outside pierced me where her hand was, and my heart began to beat down there instead of the cry. One of the girls was doing her piano practice: the pearly notes made me think of the necklace of cool droplets from a park fountain. My breathing became regular again.

“Recreation’s been extended. There won’t be a study period.”

I pulled myself free. She gave a contemptuous pout.

“The school can burn down for all I care.”

“I don’t care a damn about being expelled, but I do care about being separated from you. Don’t you understand that?”

“We shall be separated anyway,” I said.

Isabelle threw herself upon me. She twisted my wrists.

“Separated, us? You’re mad. Anyway, not before summer vacation.”

“What about your mother?”

“I must always stay close to her…”

“They’re not going to separate us,” Isabelle said.

Our lips had achieved a reconciliation, our kiss of dalliance held firm.

Someone shook our door, then went into the lavatory next to ours: it didn’t disturb us. The pattering of her feet on the cement told us that the little girl next door had waited until the last moment. She lifted her pinafore, her skirt, her underclothes. My tortured flesh was falling in tatters onto lace. I opened my eyes, I saw in Isabelle’s eyes that I had been unfaithful to her with another’s secret linen. The little girl was relieving herself, but we, we felt only shame at that monotonous stream descending into the lavatory bowl. I sensed already that it was to become a memory. The little girl jumped down off the seat, fell on her feet, then closed the door carefully behind her.

“Doesn’t matter in the lightest. I shall say I didn’t feel well and you, you’ll think of something.”

“What shall I think of?”

That lock of hair would always be a slash of madness carved above one eye.

Isabelle was kissing me all over. She was covering me with decorations; I was weighing her down with medals. The springtime in her fleece was fraternizing with the springtime in mine.

We were weakening; the sensations in our loins were no longer sharp. Isabelle’s head fell onto my shoulder. I had a falcon on my shoulder, I was the Lord High Falconer.

“You said that last night.”

“We must separate. I’ll leave first.”

But not till I had pinned three kisses like rosettes onto the belt of her pinafore.

“Keep this. It’ll be a bond between us until this evening,” Isabelle said.

She stretched out her arm and unbuckled her wristwatch for me.

A fly flew away: it was the moment to part. Through the heart-shaped hole in the door I watched Isabelle walk away. The dust in the yard had her feet, the tortoise-shell pins had her hair, the air outside had her lungs, which I could never see, which I could not have against me as I breathed 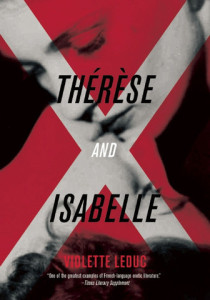