The Dread: An Excerpt from Elissa Washuta’s My Body Is a Book of Rules

During my senior year of college, in the studio apartment the university paid for me to inhabit, as though I was more courtesan than scholarship show pony, I ignored all the helpful warnings handed down from the people in charge who did not seem to believe we children could keep ourselves alive. There were resident assistants roaming the floors, inspectors sniffing the apartments for smoke that had risen from some source other than charred pizza crust. There was the faceless university safety office that shot off missives into our mailboxes, cardstock garishly printed to catch our attention but unable to compete with the issues of Maxim or High Times that we would pull from our mail cubbies, so any university notices would be dropped into the recycling, a homogenous stack. We deleted their emailed crime alerts and safety tips, too.

All the people who knew better than I did told me a thousand times to SNACK BEFORE AND DURING DRINKING, AVOID MIXING ALCOHOL WITH PRESCRIPTION MEDICATIONS. They said PACE YOURSELF, they said DO YOU KNOW HOW MANY DRINKS WITHIN A SHORT PERIOD OF TIME IS CONSIDERED BINGE DRINKING FOR FEMALES? If they wanted me to keep my ounces and hours straight, they shouldn’t have asked me to measure my medicine numerically. I operated by my own logic: for my health, I drank Tropicana with immune-boosting Vitamin C that the carton promised me was dialed up to one hundred percent of what my body needed; for my pain, I added the crystal heat of Grey Goose, which I figured was sort of less unhealthy in its clarity. My liquid dinners delivered two servings of fruit, one serving of venom.

Beyond the walls of the brick compound I called home, there were the good people who worked on the third floor of the University Health Center: the woman who took my tearful appointment requests and refilled the displays of pamphlets on eating disorders, the therapist whose placement of the Zen rock garden on the table next to the patient’s chair only made me suspicious, and the psychiatrist who supplied me with nearly as many mind-altering substances as the liquor warehouse outside the Beltway.

My windows opened to a busy street where student housing was stumbling distance from College Park’s main bars. The strip mall across the street offered the four student food groups: burrito, noodles, rotisserie chicken, and coffee. Some bitter winters, grown children set couches aflame when Maryland lost to Duke, our archrival who didn’t feel the same way about us, their hate directed at UNC. The wave of rage seemed to strain against its impotence, desperate to make Duke know how much they were hated so that they would have no choice but to hate back. Riot cops rode through on horseback like Wild West sheriffs, plowing through drunks. In my hallway, the bulletin boards said LOCK YOUR WINDOWS AND YOUR DOORS but I slept under exposed screens, welcoming whatever danger might want to claw through the mesh to choke me out in the night. DO NOT PUT YOURSELF AT RISK, the health center’s pamphlets told me. TALK TO SOMEONE YOU TRUST, they said. The girls’ high heels would batter the sidewalk all night long. No matter the day of the week or the reading on the thermometer, a legion of ladies would pass by every few minutes, bound for the bars before midnight, the after-parties after. MAKE SURE SOMEONE KNOWS WHERE YOU ARE AT ALL TIMES. STICK WITH A “BUDDY.” There wasn’t only Grey Goose in my freezer: triple sec kept it company while six-packs of Red Stripe, Natty Boh, and Yuengling’s held down the fort in the fridge. That year, I slept less often than I passed out at the hands of liquor or prescribed pills, my whittled-down body nestled into the nook of my loveseat.

My closet bulged with defective dresses bought from the warehouse clothing store across the street that sold all the club wear the department stores couldn’t move. The clothes were riddled with loose seams and the bold marks of G-Unit, Roca Wear, Apple Bottoms, and other limp rejects from rappers’ streetwear lines. The only other clothing store in College Park was the one that sold bikinis.

On weeknights, I drew from my refrigerated reserves while I worked on the assignments that would continue to earn me the perfect “A” average I had maintained since I began to bring home report cards in my backpack from my Catholic grade school. I massacred the language sections of every standardized test. For the entirety of primary and secondary school, my only grade below an A was the seventh grade B in gym class that my teacher paired with the report card comment, “Works to ability.” School was my job, homework was my overtime, and my delayed payoff would be a hefty scholarship to the University of Maryland. First, I had to sit for an interview. I wondered, what was so special about me that the adults in suits around the interview table would want to hand me a sack filled with money? Not my poems about gorging myself on NyQuil and caffeine pills, not my miniature clay sculptures of the members of Nirvana, and not my gleaming transcripts—all the other students packing the waiting room put up equally brilliant numbers. When the smiling committee asked me to make myself special, I told them I was passionate about Indian issues. I was thousands of miles away from my nation of enrollment, the Cowlitz Tribe, but I had been reading a lot, and I said I wanted to use my education to work on problems in Indian country. I had just read this book that blew my mind and I told the nodding adults all about poverty and tradition and alcohol and loss.

I didn’t know how to talk about the histories embedded in my bones, my great-grandmother’s half-silence, the damming of our language that coincided with the damming of the Columbia River, my wordless conversations with the towering petroglyph woman and unmarked rocks by the water, my belly’s swell that my mother told me was an Indian thing while I battled it with Weight Watchers point counts. I thought that if I told them all this, they would think all the Indianness had evaporated from my family line, leaving me pale and dry. So I told the adults, “I want to do something for my people,” as I thought they wanted to hear, and two weeks later, I received a thin letter thick with the promise of more money than I could imagine: four years of tuition, room, board, and books.

Not long after installing my bell-bottom jeans and rainbow shower tote into my cinderblock closet freshman year, I told the kids on my floor of the honors dorm that in order to keep my scholarship, I’d have to obsess over every grade point. That money never went to white kids, I was told—it was practically a secret minority scholarship, so I must be an undercover genius. I’m not all white, I said. I’m Native American. What’s your SAT score? they asked. What was your GPA? What were your extracurriculars? How much Indian are you? My parents taught me not to brag about matters of the brain. The first thing I learned in college was that white boys don’t care if you’re legitimately enrolled Cowlitz if they think you robbed their college education coffers of the hundred thousand dollars they worked toward through countless hours holding a tuba on a high school football field. They wanted me bundled as a sachet of sage, but they had no sense of the smell of it.

By senior year, though, I was worked over into a new piece of woman. Even on weekends, I would sit at my desk, sipping on a screwdriver while cutting arguments out of my skull, until I would hear my friends shout to me through my open windows, telling me that they had come to rescue me: it was time to go out and get fucked up.

I would gulp down my drink, pull a dress out of my closet and shove it over myself before running out into the dark, starting below baseline lucidity, skipping in throwback Jordans toward the bars, certainly too far gone to consider that DRINKING IMPAIRS YOUR JUDGMENT, made me want nothing but more of it until the bars closed, at which point, if I wasn’t busy trying to get anyone’s number, I needed to make a run for the 24-hour convenience store and clean out their supply of cheese-filled pretzels before the masses hit—that drunken indulgence, coupled with the mixed drinks, might be my only intake some days.

That year, while I worked toward leaving Maryland, my body, never a temple, became a haunted house. I tried to reduce the number of rooms I carried, shutting the doors on my love handles, narrowing the hallways of my loose upper arms, and collapsing the great hall of my gut. If I made myself into a tiny studio apartment, I reasoned, I might banish all the ghosts that clung to my bones. If only I had known that as the fat dissolved, the ghouls hiding in it would wake up and begin their rampage. I would get skinny, yes. Some days I would try so hard you’d think I was trying to burn this motherfucking house down.

elissa washuta my body is a book of rules 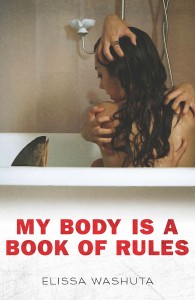 My Body Is a Book of Rules
Elissa Washuta