Is This A Book For The Heartbroken?

This is Ruth’s introduction to our November pick, The Terrible Girls.

A few weeks ago at a dinner party I (Ruth) accidentally started an argument with a stranger over Mortals, a novel by Norman Rush, which I confessed to “hate-reading.” Jonathan (the stranger) happens to be a Norman Rush expert—this sort of bad luck is mine and mine alone, I feel—and so I found myself in the awkward position of having to logically and instantly defend an opinion I had formed slowly and emotionally.

Mortals (spoiler alert!) is about the dissolution of a long, loving, and—it grosses me out to type this, but it’s a central concern—sexually satisfying marriage. We argued vocabulary, themes, prose style, were the sex scenes repulsive, Y/N (the phrase “His penis was dripping” was memorably incorporated), to no conclusion. I could tell Jonathan was dying to say something else, but feared doing so would be rude, so I said it for him: “I haven’t felt strongly about someone in a long time, so maybe there’s no way I’d find this relatable right now. . . ”

Unfortunately the dinner we had been waiting three hours to eat was served at precisely that moment, so I didn’t get the opportunity to finish, “. . . but ultimately that shouldn’t matter, because good literature should easily bridge the gap between personal experience and the universal, the general, or the specifically foreign experience.” At least that’s what I would have said if I hadn’t been ravenously devouring whatever food I could get my hands on.

I believe that, but I also believe that some books are more compelling at certain times in one’s life than at others, and our November book, The Terrible Girls by Rebecca Brown, is perhaps one of them. In an interview with Brown, included here, Emily asks, “Is this a book for the heartbroken?”

The Terrible Girls is about hunger, and power, and the predilection, perhaps pathological, for conceding something important to another in hopes that in the long run, it pays off—the same things, actually, my argument with the Norman Rush expert was about. But it is also about heartbreak. The eight connected stories explore a sort of heartbreak that is brutal, obliterating, and worst of all, repetitive. Terrible things can be difficult to ignore; love is not easy to pick out of a lineup. Sometimes it looks like attention, or compulsion, or pain, or sacrifice. What happens when you can’t stop giving? What happens when sacrifice becomes addictive? Or when denying pain is itself a kind of pleasure?

“I’d give my right arm for you,” the narrator says to her lover in “Forgiveness,” who then demands it, leaving the narrator with a bloody stump. “I had the feeling you didn’t think I would really do it, that you were testing me to see if I would, and I wanted you to know I would,” the narrator says. “Also, I believed you wouldn’t have asked me for it unless you really wanted it, and needed it.” You’ve followed me through three changes of address, says the narrator in “Junk Mail.” She sees herself alone on a desert island, finally at peace, when her lover begins dropping packages, from a helicopter. The packages pile up, faster and faster, red-splotched and dripping at the corners, overwhelming the island. There is no relief in sight, only recursion, repetition, more lost parts.

We will visit other addresses, have more encounters with the terrible girl(s). Even when their true nature is evident, the terrible girls are difficult to leave: “You were, despite how you had made me wait, and made me wait for nothing, and then, despite how I tried to forget and then to stay away from you, and despite the true and awful secret I had kept of you, still, still, to me most terribly, almost forgivably, beautiful.” Self-abnegation can be a terrible addiction too.

I’d like to give this book to anyone suffering a massive heartbreak, along with a Blonde Redhead mixtape and a carton of cigarettes. I’d also like to give it to the well-intentioned friends saying this person should get it together and join OkCupid already, because loneliness and emptiness are universal, and it can be—it will be—terrible out there for all of us. But most of all I’d like to give it to those solitary few who believe their loneliness and emptiness are permanent, and who see no analogues for their state in life or art.

The final sex scene in Mortals—the penultimate scene in the book—is especially florid and fawning —“her breasts were killing him, her blunt instruments”—and Jonathan and I debated it intensely. I thought it was the most egregious example of the book’s sexual failings (heh). Jonathan thought it was fine. “They’re in love,” he said.

“Well, I’m involved but I’m not in love,” I replied, with triumph, as if I had scored a point.

I’m not sure now what I thought I had proved, that I wasn’t one of those evil sex-hating feminists? That if any recent sexual activity was the bar of entry for this discussion, I had passed? In any case, I was wrong. What I said wasn’t true. I was in love and not involved, the worst combination, and I didn’t know it yet. I would figure it out shortly, when I reread The Terrible Girls in order to write this introduction. You’ve followed me through three changes of address. I put the book aside, I counted up the times I’ve moved. Five, maybe six. I felt pretty terrible. Then I flipped to the end and read “The Ruined City.”

Look at it, I said, though I didn’t look. It’s been down below so long. It’s changed. It won’t be what it was again.

I know, she said. But we came here to get it. It’s yours. 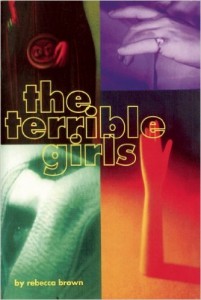