Here’s a quote from Emily Cooke’s recent essay on Dorothy Baker in the LRB. It’s paywalled on their website, but you can read it with a day pass (or subscribe to the LRB!)

“In 1962, the daughter of a friend of Dorothy Baker’s went up to her house in Terra Bella, California, to interview the 55-year-old novelist. ‘What is your real purpose in this thing?’ Baker said as the tape began to roll. The interviewer replied that the material might eventually be interesting to literary historians. It’s easy to imagine Baker raising her eyebrows at the answer. She could see why one might want to read interviews with, say, Herman Melville, but couldn’t see the point in being recorded herself. She was, she said, ‘not quite good enough’, or at least not ‘good enough to be considered good’. Her name didn’t rank: she was ‘not one of the good writers of the United States’. Her reputation had followed ‘a steady progression downhill’, and all in all she was ‘very sad and considerably depressed’ about her ‘so-called career’.

If critical reception is the measure, Baker’s story of her own decline was not too far off the mark. Her first book, Young Man with a Horn (1938), published when she was 31, was a hit with critics and a medium-sized public – among secondhand booksellers old editions are still a familiar sight – and was made into a movie with Kirk Douglas and Lauren Bacall, but no subsequent book did as well. Her second novel, Trio (1943), had explicit homosexual themes and, according to her, appealed only to a ‘coterie’ audience. A play based on Trio was closed in New York on grounds of obscenity. Our Gifted Son(1948) flopped. Baker moved from Cambridge, Massachusetts to the Terra Bella ranch with her husband and child – and another on the way – and didn’t write another book for a decade. The fourth and final novel, Cassandra at the Wedding (1962), did better, winning the admiration of Alfred Kazin and Carson McCullers. Still, a good portion of the 1962 interview concerns Baker’s sense of failure. Twenty-five years into her career, she was not among the handful of writers considered the very best. The fact desolated her.” 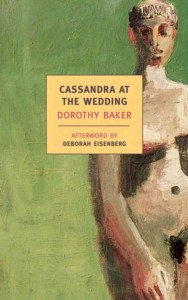 Cassandra at the Wedding
Dorothy Baker